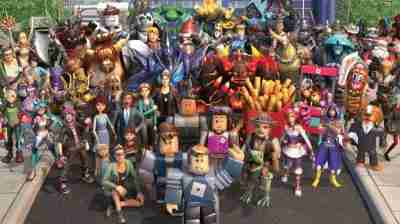 PLAY HERE! Roblox Report Alert! I got a message from Matthew Warneford, who is the Founder of Dubit. He and his co-worker Andrew Douthwaite sent me a report Roblox for Brands. As a gamer you must be aware of gaming platforms like Steam, Epic Games, Play Store, etc.  but this article focuses on a platform that has one of the largest children gaming audiences aged 9-12 with logging over 1.5 billion hours a month. Yes, we are talking about Roblox, a fun, safe, and new place for kids to hang out, socialize and play games with their friends.

Roblox is a platform that hosts a little over 19 million multiplayer games and over 115 million players. Roblox values at $4 billion after its recent funding. An interesting thing about this platform is that anyone can build a game. And most of the games are build by the community of players i.e. children. This platform is also popular among teenagers with an average of more than 40 million hours played each month.

Now, let us talk about Roblox Games in numbers. There are more than 115m active users on this platform every month. And there are 5000 games with one million+ plays. The top games on Roblox make $3m a year and the payouts to developers were over $110m from $30m in 2017. There are approximately 35000 developers that are making bucks on this platform. The best game on Roblox earns over $10m a year while games in the top 100 average $420,000. Moreover, Roblox games brought in $29.6 billion in views to YouTube. It is not only just about games, there’s more to it; it is reported that more than 40m toys sold on this platform.

Given the magnanimity of this platform, it is anticipated that all major kid brands will join hands with Roblox soon. The primary business model for developers is the in-game purchases in terms of items, weapons, special stages, etc. IN addition to that there are five types of items that can be sold on the platform like Cosmetic, Functional, Loot Boxes, Game Passes, and Pay for Access. Games like Adopt Me, Welcome to Bloxburg, Natural Disaster Survival and Super Striker League are worth your loved one’s time.

Here are some bulleted highlights on Roblox Games;