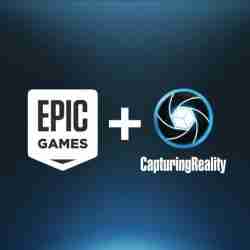 The shopping season just won’t end for Epic Games as it adds a photogrammetry company, Capturing Reality, in its cart. Capturing Reality is adept in creating 3D models from laser scans or pictures. CR is the developer behind RealityCapture, software that generates 3D models based on laser scans and pictures. The team behind the company has extensive experience in computer graphics, computer vision, parallel computing, pattern recognition, machine learning, and photogrammetry.

This team’s work will surely prove as a positive addition to the Unreal Engine ecosystem. However, the company will continue its services and support to existing as well as new customers.

CR in their website shared the news about the acquisition and added, “At Epic, the Capturing Reality team will continue to grow and work closely with the Unreal Engine team to make their technology more accessible and affordable.” Indie Game Among Us Epic Giveaway – Inside Gaming News 24/7

Epic plans to add the powerful photogrammetry software into the Unreal Engine ecosystem. This will help the developers to upload images and come up with photorealistic 3D models in a snap.

Michael Jancosek, the co-founder of Capturing Reality, said, “Our mission at Capturing Reality is to give our customers the most powerful and easy-to-use photogrammetry solution on the market, so they have the freedom to focus on their business.”

Capturing Reality fellow co-founder Martin Bujnak added, “Epic is clearly aligned with this mission, and has a proven track record of taking existing technologies and making them more accessible to developers across industries.

We look forward to partnering with their team to accelerate adoption of our technology and moving the photogrammetry industry forward together.”

Epic is on a solid shopping spree since 2019 acquiring companies like 3Lateral, Agog Labs, Psyonix, Twinmotion, Houseparty, Quixel, Cubic Motion, Hypersense, SuperAwesome, RAD Tools, Tonic Games Group, and a shopping Mall in North Carolina to top it all off.