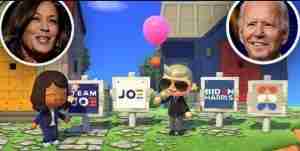 Well, well, talk about some smart moves, ladies and gentlemen, political campaigns have reached the virtual world and virtual yard signs are available in a Nintendo game. A smart move indeed to engage the virtual online community in voting when the traditional way of campaigning has become unsafe.

As the saying goes, ‘Necessity is the mother of invention,’ the Jo team assessing the limitations due to the pandemic, have thoroughly rethink their campaign strategy. To organize their voters, Biden’s team has taken their campaign to the next level and introduced live-streamed events and fundraisers.

When we specifically talk about Animal Crossing, Joe Biden’s Presidential campaign has launched four official yard signs, users can download and use them by scanning QR codes via Nintendo Switch online app. These four-yard signs are the Team Joe logo, Biden-Hariss logo, the ‘Joe’ pride logo, and a picture of aviation sunglasses.

Due to the pandemic, social gatherings became unsafe and Animal Crossing: New Horizons became a favorite platform for people where virtual weddings, concerts, talk shows, and dates were carried out. The idea of going virtual was a success for many, Travis Scott held his first virtual concert in Fortnite were more than 10 million players registered and attended the concert.

Biden Campaign’s spokesperson, Christian Tom, said in a statement that, “ As we enter the final campaign stretch towards November, this is one way we are finding new creative and innovative ways to meet voters where they are and bring our supporters together.” Biden, seizing the opportunities put forward by cyberspace, has increased his outreach to a whole new community, while Donald Trump has followed the traditional way of conducting rallies and in-person meetings, insisting on doing it safely and mocking his adversaries for being timid and staying indoors.

Though many players liked the idea and got pretty excited about the Biden yard signs many others were angry at Nintendo for allowing politics to penetrate in a fun game.

What do you think about politics penetrating in video games? Let us know in the comments below. Until then, Ciao!