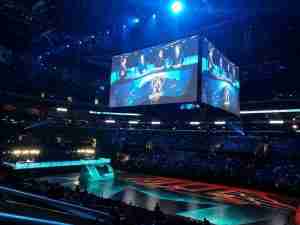 Home – asia – What About Esports?

The true thrill and excitement in gaming can only be obtained through competing and challenging one another. Its was developed keeping the same purpose in mind. For those who don’t know, esports is a form of sporting competition in video games. Matches are organized in which players from all areas around can take part to win different prizes. Check out my podcast with Evos Esports. Nowadays, e-sports has become a worldwide trend in which players from all over the world can take part while staying at their homes. Today we can see many top gaming platforms that organize online e-sports competitions for the thrill of gamers. Similarly, the  industry is developing with each passing day and is not planning to come down any sooner. It’s started emerging in the 1990s with its idea coming from small towns and cities where people used to gather and compete with each other in fighting games and shooting games. The trend started picking fame and with time, emerged as one of the most popular online sport today. If we look up into history, e-sports was officially practiced in 1972 at Stanford University. The university students were invited to compete in the game, “Spacewar” with a prize for the winner. Besides this, many events in history led to the development of esports.

Although competitions are a basic part of video gaming, they lacked professional gaming. This is when professional gamers and different gaming brands started turning to e-sports in the late 2000s that skyrocketed its popularity.

Although electronic sports is not limited to any specific gaming genre, it took most of its fame from fighting games, first-person shooters, multiplayer online battle arena, and real-time strategy games. The following are all-time top games in it.

Well, if you are a hard-core gamer and you want to show your skills than it is the best platform for you. Every year, this distributes a large prize pool among players all over the world. The following are games with the largest prize pools.

The e-sports industry is growing and developing by each passing year. In 2016, the total e-sports revenue was $493 million that increased by 33% over the year to $655 million in 2017. Similarly, the esports industry was expected to cross its $1 billion mark at the end of 2019, which undoubtedly happened with a total esports revenue of $950 million in the year 2019. Now, it is expected to reach $1.1 billion with a growth of 15.7% in 2020. With this quick growth rate, it is going to reach new heights in the field of gaming.