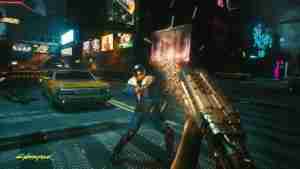 After a plethora of complaints and memes against the Cyberpunk 2077 launch, the bumpy ride continues for CD Projekt Red as Sony decided to pull out the game from its PS Store.

Sony also assured that whoever has bought Cyberpunk 2077 from the digital storefront is entitled to a full refund. The process for the consumers is to sign in on their PS account and submit a request. The problem for CD Projekt Red started soon after the launch when players found rampant bugs and game optimization problems that resulted in a bad playing experience for many. There were routine crashes and visual glitches reported by players playing on PS5. As for PS4, things were a lot worse for Cyberpunk 2077 due to poor framerate, texture pop-in, and overall performance.

Sony Playstation’s decision to take down Cyberpunk 2077 hasn’t been welcomed by every gamer, many criticized the decision and supported Cyberpunk 2077 on Twitter. Many players were of the view that Sony’s pulling out the game is a decision taken in a haste and a bit too soon because all digital copies and physical copies will continue to receive updates. CD Projekt Red reiterated and said, “We are working hard to bring Cyberpunk 2077 back to the PlayStation Store as soon as possible.”

Sony Playstation’s decision to pull out the game wasn’t welcomed by the developers as the director of Cyberpunk has indirectly made his opinion on the issue. Adam Badowski’s liked tweets show his discontent, one Tweet he liked said, “Pulling the game from the store? That’s cute… The game works, but this been blown way out of proportion by media needing some clicks.” Another Tweet liked by him claimed that Marvel’s Avengers came out in an even worse shape but Sony didn’t pull it out of its store.

It is still unclear when Sony Playstation will bring back Cyberpunk on its PS store but one thing is for sure that this decision was made in haste and wasn’t the best decision for the gaming industry.