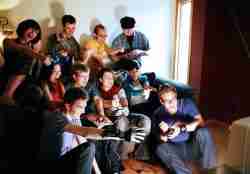 It seems that people are having a blast watching video game streams as Twitch sets a new record last month. Twitch recorded a mammoth 2.06 billion hours watched in March according to a report by StreamElements analytics partner Rainmaker.gg. The most-watched game for the first time since its release was Grand Theft Auto V. GTA V has had a lions’ share in the record-breaking figure. 2.06 billion hours figure represents a 105% growth year over year for Twitch.

Let’s take the spotlight back on GTA V as it was the most-watched game for the month at 181 million hours. Second, on the list we have League of Legends, a game still popular after so many years, with 143 million hours. LoL is followed by Fortnite at 107 million, COD Warzone 85 million and Minecraft at 82 million.

[novashare_tweet tweet=”Twitch recorded a mammoth 2.06 billion hours watched in March according to a report by StreamElements analytics partner Rainmaker.gg.” cta_text=”People Watch Twitch Together! Are you?” hide_hashtags=”true”]

As for GTA V, it has clinched the top position on SteamElements for the first time ever. The reason behind GTA V’s tremendous success on this video game streaming company is in-game role-playing done by streamers. This practice has renewed interest in the game. Moreover, as we all know that internet is a strange place where strange things happen. This strange behavior is manifested in the growing interest of viewers watching sleeping streams. Twitch users enjoyed watching streamers sleep for more than 2 million hours.

CEO of StreamElements explained this fascinating behavior, “In 1964 Andy Warhol released a controversial film called Sleep which featured edited clips of his lover sleeping for 5 hours. The appeal among its fans were those rare moments where something happened, like a simple change in position.”

Now the same thing is happening on Twitter, people find it amusing and oddly satisfying to watch streamers sleep. Stay with us for more updates on game streaming platforms.