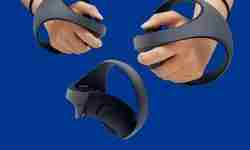 The technology is used in the triggers of each controller and Sony has decided to use this technology in future VR games. In addition to this, PS5 VR controllers also include haptic feedback technology and finger touch detection. This means that you don’t have to press areas where you rest your thumb and fingers. Hideaki Nishino, Head of platform planning and management at PS, said, “This enables you to make more natural gestures with your hands during gameplay.”

The tracking between these controllers and Sony’s new VR headset also gets better via a ring at the bottom of the new controller. When compared to the previous PS Move controllers, the new ones are more improved especially when it comes to ergonomics. Nishino further added, “SIE’s Product, Engineering, and Design teams have collaborated to build our new VR controller from the ground up with a goal of making a huge leap from current-gen VR gaming. He also said, “Prototypes of our new VR controller will be in the hands of the development community soon, and we can’t wait to see what ideas they come up with and how the controller helps bring their imagination to life!”

As for the next-gen headset, Sony has yet to reveal its details. However, Sony did share a couple of details like improved resolution, field view, and a single cord to make life easier for gamers. Sony is not set to release the next-gen headset this year, however, one thing is for sure that the company is all set to begin its alpha testing soon with game developers.